​What is the Life Leecher?

It is an original character that was part of a short story that I wrote long ago while still a student attending High School.

Briefly, the story begins centuries ago in a rural community where a group of people have gone missing. A search is organized where a sinister robed stranger is discovered occupying a deserted barn on the foothills miles from town. Shortly it becomes obvious that this stranger is the reason for those missing as their bodies are found as sunken husks attached to some oddly mechanical unknown device. The stranger is dealt with and his body buried where no casual traveler might ever venture. As an extra security, a circle of five standing stones are erected about the grave each with a runic symbol carved upon it. The magic of the circle it was believed would contain the evil within so that it’s spirit would never again roam.

But eventually the circle was broken and the Life Leecher was free once more to drain it’s victims of their living essence. This time far worse than before!

Thats only the prologue as the story proceeds to follow the evil into more modern times and the devastation that results.

ABOUT THE MODEL KIT

The Life Leecher is depicted here as a ghostly apparition rising from the center of the aforementioned standing stone circle. This is only the early manifestation of the thing as it proceeds to take on it’s full form later in the story.

This is an 8 piece, all resin, hand-cast model kit which once assembled measures a total of approximately 10’” in height including the base with the figure being in 1/12th scale.

The parts included are as follows:

Assembly is straight forward with all parts keyed for accurate alignment to their corresponding contacts.

It is recommended that the body be assembled separately before permanently anchoring to the base as this will allow for much easier painting of the individual pieces or the whole assembled body.

Due to the delicate parts, this kit is recommended for the more advanced modeler. 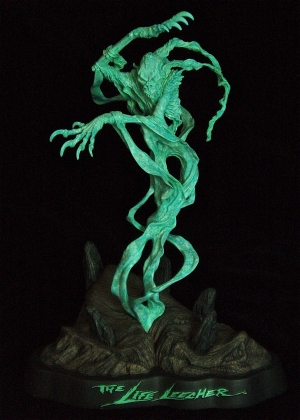